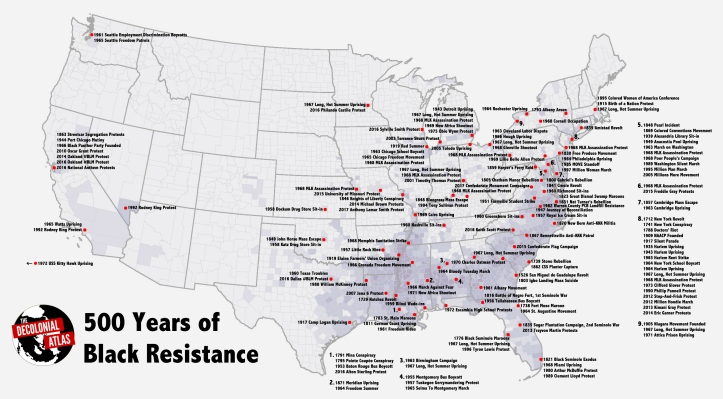 In 1526, the very first Africans arrived in North America as slaves of the San Miguel de Guadalupe colony. They promptly revolted and took refuge with the local indigenous people, becoming the first permanent non-native inhabitants of what would become the United States. Since that time, African-American resistance has taken a variety of forms as their challenges shifted from slavery to lynching, segregation, inequality, discrimination, profiling, mass-incarceration, police violence, and others.

During the slavery era, common forms of resistance included slave revolts, sabotage, and escape to free states, other countries, or independent communities (maroons). Some captives chose to commit suicide rather than submit to slavery. Perhaps the most day-to-day form of slave resistance was slowing the pace of their work. This contributed to the perception that black people are lazy and docile. If nothing else, this map debunks that racist stereotype. The African-American fight for justice has, for centuries, been as constant as it is widespread, showing that they are anything but a submissive people.

After the abolition of slavery, free black communities began to organize for self-defense against the Ku Klux Klan and lynching mobs. The early 20th century saw the first public demonstrations for civil rights after a wave of lynching violence against black communities. During the Civil Rights Movement, many nonviolent tactics like sit-ins, boycotts, strikes, occupations, and civil disobedience were developed. This era also saw the rise of more militant factions and rising discontent led to occasionally violent uprisings. Today, a new wave of civil rights has been ushered in by movements like Black Lives Matter. Activists employ the whole toolkit from symbolic actions like kneeling during the national anthem to direct actions like removing the confederate flag from the South Carolina State House and pulling down the Confederate Soldiers Monument in Durham.

May we take inspiration from the past and honor those who fought. Until justice rolls down like water and righteousness like a mighty stream, may we all keep up the fight.

The background of the map depicts the percent black population from the 2010 census.

500 Years of Black Resistance map by Jordan Engel can be reused under the Decolonial Media License 0.1.

Maps by Subject and Region

Pray for Gaza. The number of reported bombings in the past 24 hours is horrific. 2 million people trapped inside a tiny strip of land, already facing perpetual shortages of essential medicines because of Israel's illegal blockade, mercilessly bombed on the holiday of Eid.
The news is full of headlines about "clashes," obscuring the reality that one side is a state power, backed by $3.8B/year in unconditional US military aid, carrying out a campaign of ethnic cleansing in violation of international law.
Biden campaigned on raising the refugee cap to 125,000. He broke that promise, stranding thousands of refugees waiting to be processed. #NeverAgainIsNow
From 1920 to 1948, Palestine was a British-administered colony. The British government promised the land to the Zionists in the Balfour Declaration and to the Palestinians in the League of Nations mandate. In 1947, the British withdrew from Palestine, stating it was unable to arrive at a solution acceptable to both parties. In other words, the problem they helped create was now too complicated to help resolve.
"Greater America" was how they spelled "Empire" in 1899.
Apartheid is an everyday reality for millions of Palestinians, no matter where they live.
Visit Palestine: 1936 and now.
Bill and Melinda Gates are largest private farmland owners in the US.
All of West Jerusalem was once #SheikhJarrah. During the 1948 ethnic cleansing of Palestine, the Palestinians who lived in West Jerusalem were either expelled to East Jerusalem or the West Bank or left the country. While Israel allowed thousands of Jews to move into settlements in East Jerusalem, not a single Palestinian has been allowed to return to their home in West Jerusalem.
"In English, you can just say, "She's a mother." But in Wampanoag, you can't say that. You can say, "She's my mother, she's your mother, she's our mother, she's his or her mother." But you can't just say "a mother." And that's the same with all of the kinship terms. Everybody in that circle is defined by the people around them. And that's reflected in the words." - Jessie Little Doe Baird
The pandemic is far from over. As rich countries hoard vaccines and go back to brunch, elsewhere entire health systems are on the verge of collapse.
What's happening in al-Quds (Jerusalem) is ethnic cleansing. It's a Nakba. Palestinians have a right to stay in their homes. #SaveSheikhJarrah
My Tweets
Loading Comments...
Comment
×
%d bloggers like this: