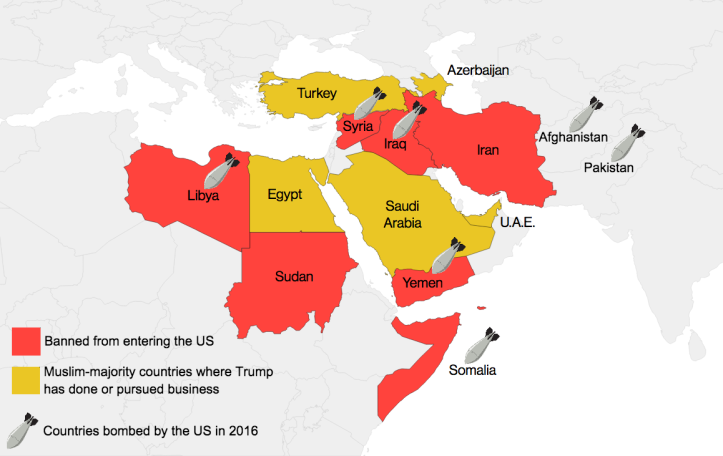 Trump’s Immigration Ban Excludes Countries With Business Ties, Includes Most Countries US has Bombed in Past Year.

President Trump has signed an executive order that bans citizens from seven Muslim-majority countries in the Middle East from entering the United States for 90 days, according to the White House. His proposed list doesn’t include Muslim-majority countries where his Trump Organization has done business or pursued potential deals. Properties include golf courses in the United Arab Emirates and two luxury towers operating in Turkey.

Maps by Subject and Region

Rest in power.
Why do so many map publishers think children need to know where to mine metals and minerals on an industrial scale?
In cities, public transit is often the main way people relate to their local geography. In a concrete environment, it’s a powerful practice to pause and reflect on what lies beneath us, how urbanization has changed the topography and hydrology, and what the land wants to be.
The fact that these deaths are routine and predictable shows that no amount of scrutiny or training can fix the institution of policing because it is, at its roots, inherently violent and racist. It cannot be reformed.
We can't afford to let corporations monopolize lifesaving medical products to pursue their bottom-line without regard to global needs.
Replace this: “The cop killed an innocent child.”
The national parks were founded on land that was once ours, and many were created only after we were removed, forcibly, sometimes by an invading army and other times following a treaty we’d signed under duress. When describing the simultaneous creation of the parks and Native American reservations, the Oglala Lakota spiritual leader Black Elk noted darkly that the United States “made little islands for us and other little islands for the four-leggeds, and always these islands are becoming smaller.”⠀
Reintroducing a few keystone species, such as elephants (which spread seeds and create important clearings in forests) or wolves (which can control populations of deer and elk), could restore up to 20% of the world’s land to ecological intactness.
Narendra Modi's use of internet shutdowns to stifle digital dissent has taken India from "the world's largest democracy" to merciless repression of democratic expression.
In 1865, a band of Modoc discontent with broken treaties and life on the Klamath Reservation in Oregon, returned to their homelands in Northern California. They wanted a reservation of their own on Kóketat (Lost River). By 1872, the federal government became determined to capture the defiant Modoc and return them to Oregon. For 8 months, 80 Modoc warriors withstood a force of 1,000 US soldiers. The Modoc lost only 6 people in direct combat while the US suffered 45 dead including a general. Afterward, the Modoc survivors were sent to Oklahoma, where they were held as prisoners of war until 1909.⠀
Local embroidery of Slovakia.⠀
A less violent world begins with disarming the police 𝒂𝒕 𝒕𝒉𝒆 𝒍𝒆𝒂𝒔𝒕. It's really not that radical.
My Tweets
Loading Comments...
Comment
×
<span>%d</span> bloggers like this: